It seemed like my temple fatigue in Chiang Mai had already subsided and I was ready to see more Buddhist temples. From Umphang, I traveled by bus to Kamphaeng Phet, stayed two nights there, and then continued to Sukhothai.

Kampaeng Phet was a royal town in the ancient Sukhothai Kingdom, while Sukhothai (town) was its capital. They are included in UNESCO’s list of World Heritage Sites as “Historic Town of Sukhothai and Associated Historic Towns.”

I expected the popular Sukhothai to be crowded with tourists, so I thought it would be nice to visit Kampaeng Phet and explore ancient temples ruins in relative solace.

I rented a bicycle at 3J Guesthouse and started my tour at the riverside of the Ping River. The staff at the guesthouse told me there was a parade and boat race happening that day and I was glad I didn’t miss it.

I was able to explore two temple groups at the park namely Kamphaeng Phet and Khet Aanyik. Both were within easy biking distance from my guesthouse and had lots of ancient Buddhist temple ruins. Most of the old structures were already in a severely ruined state but I was still enjoyed visiting them because there were no crowds around to share them with.

One full day was enough to go to all the major sights by bicycle. Here is a list of the standouts:

After enjoying the crowd-less ancient temple ruins at Kamphaeng Phet, I hopped on a songthaew for a short ride to Sukhothai, known historically as the capital of the first Kingdom of Siam. I dropped off at “New” Sukhothai, which was where the bus station and most hostels can be found.

After checking-in my hostel room, I got on another songthaew to “Old” Sukhothai and rented a bicycle for the rest of the afternoon to explore Sukhothai Historical Park.

I stayed at the park around until after sunset because I had a feeling that it would be a nice experience to see the twilight beside the big pond at the park. True enough, the sunset, at the time, was spectacular and I got to enjoy it peacefully (without the crowds since they already left). 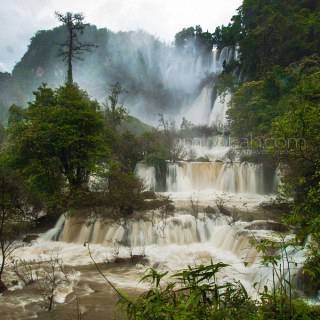