We finally set off to see the islands of Bacuit Bay in El Nido. The morning was shrouded by thick clouds hovering over the beautiful seascapes. Perfect clear blue skies didn’t greet us that day but we weren’t bothered because El Nido was beautiful under any light. If anything, it added to the exotic allure of the islands.

Packed and ready to go, we started walking towards our pumpboat service at around 9am.  We had to wade through (mostly) ankle deep water for around 200 meters or so because the tide was too low for the boat to dock directly in front of Hadefe’s Beach Cottages, the resort where we spent the first two nights in El Nido. Sitting eagerly in the boat, we waited until the crew to finished preparing for the tour and loading provisions for our picnic lunch. Fifteen minutes later, we were on our way to our first destination, the lagoons of Miniloc Island. 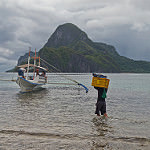 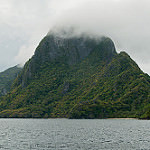 The lagoons of Miniloc Island are part of “Tour A.” This tour, which I experienced during my first trip to Palawan, was the best in El Nido.

We combined the highlights of Tour A and B for the island hopping tour on our first day. Combination tours are available if you rent a whole boat for the day. Since there were nine of us in our group, we thought it would be an excellent option for us to book “combination tours” so we can experience the best of the Bacuit Bay islands. Our boat stopped in front of a rock wall off the coast of Miniloc Island. From there, we had to go down and swim to the small lagoon. Entrance to the Small Lagoon

This lagoon was so beautiful! I wasn’t able to take photos inside because I didn’t bring an underwater casing for my camera. For this purpose, I ordered an underwater case online weeks ago but the package did not arrive on time. Such a bummer!

On a few occasions, I have swam on deep water and risked carrying my camera over my head but I kept thinking about how far the distances between shallow waters were in the small lagoon. I finally decided not to take the risk and just enjoy the scenery for my bare eyes only :D Views outside the Small Lagoon.

I’ve had some mixed feelings backtracking the Big Lagoon. The passageway going to the Big Lagoon was truly breathtaking the last time. Along the way was a scenic pass that was bounded on both sides by sheer limestone cliffs and forest covered hills. The calm waters of the narrow pass was navigable by pumpboats during high-tide.

I didn’t find the lagoon itself to be surprisingly spectacular because it looked similar to the small lagoon, something we had already seen. The pass to the Big Lagoon in Miniloc Island, El Nido, Palawan On this trip, however, the Big Lagoon totally surprised me. It was low-tide that time and the scenery looked so different from how I remembered it. At last, we didn’t have to speed through the passageway.

We went down a few hundred meters from the big lagoon and took our time walking along the winding passage. These photos of the big lagoon were taken by a Samsung EX1 camera (or known as the TL500 in some countries). I bought it from an online camera store. I’m loving this point and shoot! The quality is not as good as an SLR but it’s pretty decent and impressive for a compact camera. To get SLR-esque quality, photos taken by the Samsung EX1 needs further post processing. Top points for being able to shoot in RAW format.

My biggest concern with this camera is how it doesn’t get the correct white balance / temperature in auto. Adjusting the temperature of photos is still a skill that I want to improve on. Peter Jaena also carries around an EX1 and is good at this kind of stuff (Peter’s flickr photostream). The other tourists who brought kayaks Big Lagoon has my approval this time. Not that it matters :|

Before and during the tour, I kept asking the boatmen if we were going to visit the Secret Lagoon. I wasn’t so much interested with the lagoon itself but the beach outside the secret lagoon was one of the most captivating sights I’d seen. Photo of the beach outside the secret lagoon taken during my previous trip to El Nido (more photos posted here).

Many Filipino tourists who visit El Nido are in search of the location that inspired the setting for Alex Garland’s novel “The Beach.” I’m betting 99% of backpackers around the world was inspired to backpack or visit Thailand because of that movie alone ;D Because Alex Garland spent an extended period of time in the Philippines (El Nido, in particular) before he wrote the book, many were led to believe that “The Beach” was based from places he visited in El Nido. This rumor has grown to be an urban legend in Philippine travel circles.

Unfortunately, we didn’t visit the secret lagoon again. We had a lot more spots to visit that day. I made peace with the fact that we would be visiting the other parts of El Nido that I haven’t seen yet.

Miniloc Island is also the location of a beautiful high-end resort called El Nido Resort – Miniloc. We only passed by the resort on our way to Shimizu Island. I would love to spend a night or two there one of these days #wishfulthinking. El Nido Resorts has many properties in Palawan. All of them located in the more remote locations (away from the crowds) such as Lagen Island, Apulit Island, Pangulasian Island (Taytay). Closer view of the resort

Because of the popularity of this resort, many people think that traveling to El Nido, in general, is expensive.

On the contrary, traveling in El Nido can be cheap. There is whole range of resorts in El Nido mainland that caters to all types of travelers. If you want to experience the islands of Bacuit Bay, you can take the islands hopping tours like what we did.

After visiting Miniloc Island, our boat headed southwards for picnic lunch at Entulala Beah, fish feeding off the coast of Shimizu Island, and a visit to Snake Island, Cudongon Cave, and Seven Command Beach. Subscribe to Ambot-ah! feed for follow-up posts.